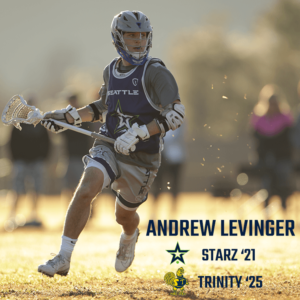 Congratulations to Starz ’21 midfielder, Andrew Levinger, for his commitment to the admissions process at NCAA D3 Trinity College. Levinger has been a member of the Seattle Prep National Honors Society for three years and has earned Dean’s List distinction twice. He was selected to the Elite 100 and Adrenaline Challenge All-Star teams.
“Seattle Starz has been a great experience for me on and off the field,” said Levinger.  “It has developed both my character and my competitive spirit. It has been a place that has pushed me to be my best self at all times. I have also learned the importance of consistent hard work and never taking my spot for granted. Thank you to Coach Scott Kelly for giving me this opportunity in 7th grade, and thank you to Coach Jack Pruitt for the guidance over my high school years.”
“A huge congratulations to Andrew on committing to the admissions process at Trinity College! Andrew is a no-frills, hard-working machine,” stated Pruitt. “Andrew has been impactful throughout the midfield for us by initiating and finishing possessions as a dangerous dodger and shooter, and by smothering opponents with his athleticism on defense. He is a lead-by-example kind of leader whose consistently high levels of effort, execution, and passion have earned the trust and respect of his Starz teammates. I know those same traits will serve him well under the guidance of Coach Tarnow at Trinity. Congrats again to Andrew and GO BANTAMS!”
← HENRY BRUININKS COMMITS TO ADMISSIONS PROCESS AT BATESCONNER McMULLEN COMMITS TO HAMPDEN-SYNDEY COLLEGE →