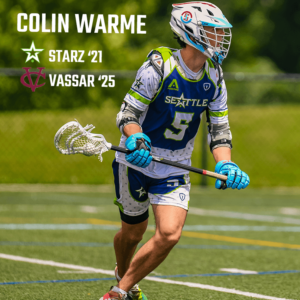 Congratulations to Starz ’21 Colin Warme on his commitment to NCAA D3 Vassar College. The Sammamish HS senior is a class officer with a 3.8 GPA and was named to the first all-conference team twice in addition to being team captain. Warme was the Battle of the Hotbeds MVP and all-star.

“Starz has given me the opportunity to play alongside and against some of the best players in the country,” said Warme.  “This program and these coaches helped me grow as a player and receive the exposure necessary to take the next step in my lacrosse career. It has pushed me to be the best player I can be at all times. I would not be the player I am today without the influence of both Coach Jack Pruitt and Coach Dylan Hummel.”

“Congratulations to Colin on his commitment to Vassar! As a new player on a team, it is easy to take a back seat and defer to existing team leaders. Instead, Colin played an active role in setting a competitive and growth-oriented tone for our summer 2020 campaign from our very first meeting together,” stated Coach Pruitt. “This natural leadership ability, combined with his stunning athleticism and rapidly developing skillet, has him poised to be an impact player on the turf and in the locker room at Vassar. Congratulations again to Colin and GO BREWERS!”