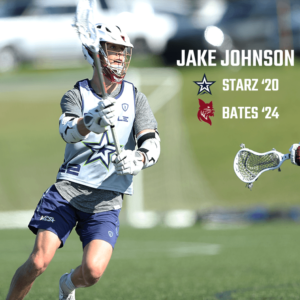 Congratulations to Starz ’20 midfielder, Jake Johnson, on his commitment to the admissions process at NCAA D3 Bates College. The Bobcats, who compete in one of the most competitive conferences in division three, the NESCAC, were nationally ranked as high as 11th during their 2019 campaign. Bates has appeared in the conference post-season five of the last six seasons and the NCAA tournament twice in that time frame.

“I’m very appreciative and lucky to have the opportunity to attend Bates College and play D3 lacrosse in the NESCAC,” stated Johnson. “I want to thank everyone who has supported me and helped me throughout this process. First, my parents who have supported me and made sacrifices for me during this process; I can never thank them enough. Next, Seattle Starz and specifically coaches Lewis, Rich, Jack and Matt, for always pushing me to compete at the highest level, exposing me to lacrosse on the east coast and helping me develop into the player I am today. I would also like to thank my Lakeside coaches and my many teammates who have pushed me to be the best I can be. None of this would be possible without them.”

“Congrats to Jake on his hard-earned and well-deserved opportunity at Bates College,” said HS Boys Director, Jack Pruitt. “Jake is a competitive and talented player who led his Starz team with execution, compassion, and intensity. Seattle Starz is excited to see Jake’s leadership, athleticism, and intelligence earn him success on and off the field at Bates, and well into the future. Congrats to Jake, an enormous ‘Thank you’ to the Johnson family for their work with Starz, and GO BOBCATS!”