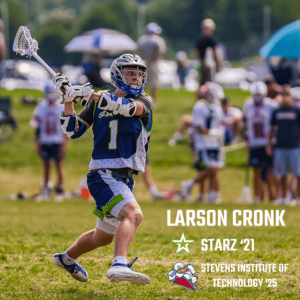 Congratulations to Starz ’21 midfielder, Larson Cronk, on his recent commitment to NCAA D3 Stevens Institute of Technology in NJ. Larson is a National Honor Society member and four time Honor Roll and Dean’s Athletic List student at Seattle Prep. On the lacrosse field, he was twice named to the MDLX All-Star team.

“Starz has helped me grow not only as a player,” explained Cronk, “but also as a person by helping me develop work ethic and competitiveness. It has allowed me to compete against teams from all over the country and for me to gain exposure. Thank you Starz and Coach Pruitt for everything over the past few years!”

“Congratulations to Larson on his commitment to Stevens! Larson is a blue-collar player who earned every ounce of success he experienced on the field,” said Coach Pruitt.  “After putting his head down in early seasons with 2021 Elite as a defensive midfielder, he dove deep into improving his shooting and became a serious threat on the offensive end. I am so proud of him for attacking his weaknesses with poise to turn them into strengths – he is a model for all players to follow. Everyone at Seattle Starz is excited to see Larson continue his amazing journey under Coach Peluso’s guidance at Stevens Tech. Congrats again to Larson and GO DUCKS!”