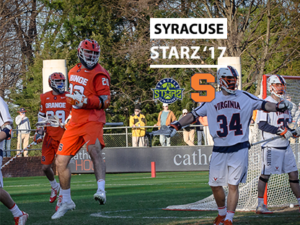 This season the Syracuse Orangemen went undefeated in conference play and claimed the ACC regular season championship which meant beating three teams ranked in the top 10 in the country. On Sunday, the Orange will take on Cornell in the first round of the NCAA D1 Men’s Lacrosse Championship Tournament.

What do you believe enabled your team to go 4-0 in conference and win the ACC regular season championship?

I think our team is very driven when it comes to conference play. We know that the ACC games are crucial and al the teams we play in conference are some of the best teams in the country so we have to being our A game day in and day out.

How did playing for Seattle Starz help you to be successful in your first season of collegiate lacrosse, both on and off the field?

Having played for Coach Lewis for a few years really prepared me. Coach Lewis and his staff are very driven to make the players they coach eager and ready to win at all times. They preach hard work and cultivate a winning atmosphere.

I would say the main difference is the speed of the game; the ball moves in and out of your stick very quickly. Everyone can play so you don’t want to be the person who is holding the ball too long and taking away from your teammates.

You’ve come up big in some huge games this season, like scoring the game-winner against UVA. What prepared you to be successful in those moments?

I think hard work. Having to overcome so many things in this sport has made me the type of player that will never quit. Also, Coach Lewis was always very hard on me as a player and he helped me grow when I was coming up so I think having a coach that expected a lot from me and really didn’t let me take plays off helped.

What is the best piece of advice you’ve received from a coach?

As cliche as it sounds, I would say “Stay the course” and “Work hard”. Growing up I was cut from a few teams that I thought I should have made. At the time it was some of the most devastating news I had received. Looking back on it, I’m happy I got cut because those setbacks and disappointments made me work 10 times harder in the sport of lacrosse and overall made me a much better player.

What made Syracuse the right school and program for you?

I have always wanted to play at Syracuse since I was a little kid, but the thing I liked most was the way they played the game. The coaches let us have fun and play fast. It’s the best of both worlds!

Have fun with the sport! Work as hard as you possibly can at all times. Work harder than everyone else and don’t be ‘soft’ when a coach tells you that you may not be cut out for something at that particular time or if you are not doing something right. Your coaches have the best thin in mind for their players so listen to you coaches and don’t get upset and take it personally and instead listen to them, incorporate what they say and always strive to get better.

I have had a lot of moments but the one that stands out most is from this year when we were playing our third game of the season against Army. It was tied at the end of regulation and we went on to a triple OT game. It was the first truly big game of my career. At one point we were down by give. The third OT was winding down when our goal keeper his Ryan Simmons, one of our senior captains, for a fifty-yard pass that led to the game winner. Ryan’s grandfather and great-grandfather were both coaches at Syracuse and his dad is currently a coach, so that was a very, very sweet game.

Question from our previous Alumni Spotlight: What is your pre-game routine?

I don’t really have one. I try and just be myself before the game.

Give us a question for the next Alumni Spotlight.

What is your favorite part about college lacrosse?