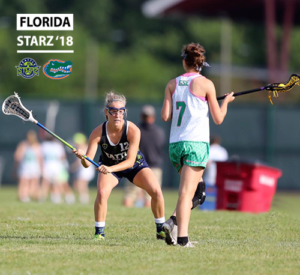 Congratulations to Seattle Starz 2018 midfielder, Maddie McMaster on her commitment to University of Florida, one of the NCAA’s top DI women’s teams. Maddie is currently a junior at Eastside Catholic (EC) High School where she helped the Crusaders win the 2016 WA State Championship. Her natural athleticism and work ethic will serve her well when she competes at the highest national level in the Big East Conference. Maddie has been the recipient of the ‘Unsung Hero’ award at EC, in addition to being named an All-Star at the UNC summer camp for recruits. Her success on the field earned her a spot on the U19 Team Washington squad that competed at the 2016 National Tournament. Starz is incredibly proud of Maddie’s achievements and will look forward to following her career as a Biology major and DI player for the Gators!

“Maddie’s natural speed and athleticism paired with her work ethic makes her a huge force on our team” says Star Coach Lyndsey Gillis.  “She’s a steady contributor in all thirds of the field; she’s that player that goes and goes and goes – I wish I had ten more just like her! Maddie’s first defensive step is incredibly fast, she finds seams in the attack and she finishes; her ability to read and react in any situation comes naturally. It’s the way she makes everything look effortless, in conjunction with her speed, that captures the eye of anyone watching. I thoroughly enjoy coaching Maddie, as she listens and executes really well. We’re lucky to have her in the program for another year!”

“Without Starz, I wouldn’t be where I am and I wouldn’t have met some of my closest friends. Without Lyndsey Gillis I wouldn’t have learned as much as I have or been seen by any colleges. She vouched for me 24/7. Thanks to the Starz family, I always felt welcome and they truly seem like a second family to me. I also want to thank my teammates for pushing me every time we play. I am forever grateful for the Starz community” says McMaster.