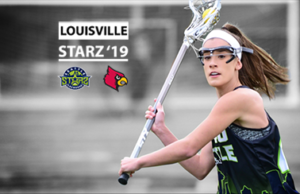 Congratulations to Seattle Starz’s Alexa Steffens who committed to the Univ. of Louisville in Kentucky. The entire Starz organization is thrilled to see Lex compete at the highest collegiate level! She will join the Cardinals in the fall of 2019 to compete in NCAA DI lacrosse and intends to major in Biology. Additionally, Lex plays high school lacrosse for the Eastside Catholic Crusaders.

“Lex has been an integral part of our attacking unit on our 2019 team. She is a constant threat around the crease, as she’s quick to find the space, using her compact and powerful frame to her advantage. Lex’s ability to find the back of the net has been paramount. She’s constantly making smart decisions on the fly – knowing when to attack and when to feed. Her work ethic and natural talent will serve her well under coach Young’s tutelage. I’m so proud of her accomplishments, and look forward to working with her throughout the rest of her high school career.” Says Seattle Starz Girls Director & Coach, Lyndsey Gillis.

“I have been playing for Starz for all 6 years I have been playing lacrosse. Every year my team was faced with the hardest and most challenging opponents at tournaments. This was really good for me as a player to compare myself to the best girls on the east coast. Starz gave me every single opportunity I have had to go to camps and be in places where I would be seen by colleges. Without this program, I wouldn’t be where I am today. My coaches through the years have made me the player I have become. I especially want to thank Lyndsey Gillis who gave me constant opportunities to go to camps and showcases in order to be recruited. Without those opportunities, I would have never made it to Louisville to attend their camp. Not only did she give me those opportunities, but she pushed me to work harder, smarter and faster. I would also like to thank Mike Pittas for teaching me to work “smarter not harder” and for just constantly giving me advice on the little things some people wouldn’t even notice. His never-ending faith in me as a player has really turned me into a confident player that loves the game. Lastly, I would like to thank Ruth Bonner for always kicking my butt because she knew what I was capable of. She gave me advice about what college coaches are looking for as I went into tournaments and camps which has been one of the most helpful things in the process of being recruited by Louisville. Without those three coaches, I wouldn’t be able to say I am committed to the University of Louisville to play lacrosse.” Says Lex.