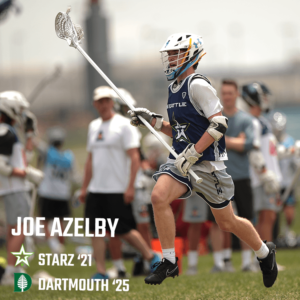 Congratulations to Starz ’21 and Eastlake HS LSM, Joe Azelby, on his recent commitment to NCAA D1 Dartmouth College. The 4.0 student has been named to the honor roll every year and is a member of the national honors society. His lacrosse achievements are equally as impressive and high achieving. In the 2019 season Joe led King Co. defenders in goals, assists and, groundballs. The two-time WA state champion was named an Inside Lacrosse Four Star recruit and an All-Star at the NXT Showcase, Madlax Showcase and Denver Shootout. He was also an Under Armour underclass tournament champion.

“Seattle Starz has provided me with an opportunity to make life long friendships, build my lacrosse skill set, and grow as a young man from the first weeks I moved to Washington,” said Azelby.  “My coaches strived to help me improve and always kept an active role in my recruiting process. Not only have I improved immensely as a lacrosse player, I have also learned life long lessons from playing at such a competitive level. All in all, Starz has given me all the resources I needed to be successful and I will forever be thankful to all the coaches who have helped me get to where I am today.”

“Congratulations to Joe on his commitment to Dartmouth! Joe has been a dominant player and revered teammate on the 2021 Elite team for the past several years and is consistently aggressive, competitive, and coachable,” stated Coach Pruitt. “While being one of the best players on an athletic team can encourage arrogance or complacency in a young man, this is not the case with Joe. Joe is attentive, encouraging of his teammates, and gives the same effort in off-season line drills as he would give in the overtime period of a championship game. I have never, in 5 seasons leading him, asked him a question without receiving a response of “Yes, coach.” or “No, coach.” By winning the effort battles and maintaining his coachability, Joe consistently sets the right tone for our team. This kind of leadership has made him a pleasure to coach, has propelled him to this great achievement, and will continue to usher him to greatness under the guidance of Coach Callahan. Congratulations again to Joe and GO BIG GREEN!”