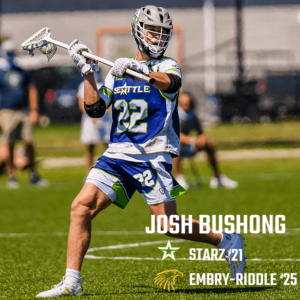 “Playing Starz gave me a great opportunity to play against some of the best teams in the country,” said Bushong. “I have grown a lot as a player and have made new friends along the way. I also want to thank Coach Jack Pruitt for pushing me to play my best every practice.”

“Congratulations to Josh on his commitment to ERAU! Josh stands out because of his ability to build great habits. Josh has an uncanny ability to fight and break old habits quickly, replacing them with new ones which elevate his game,” Pruitt stated. “This ability to learn and implement skills so rapidly allowed him to apply his natural athleticism in a more effective way, making him a tenacious on-ball defenseman. Josh earned this great opportunity through his hard work and attention to detail, and we are so excited to watch him continue to do the same under Coach Wims at ERAU. Congratulations again to Josh and GO EAGLES!”