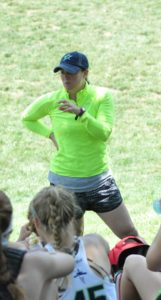 Ruth Bonner spent nine years coaching at the NCAA DIII level, most recently as the head coach of the U.S. Coast Guard Academy. During that time she coached four NCAA All-Americans, seven IWLCA All-Region players and three NCAA tournament teams. Bonner played women’s lacrosse and was on the inaugural field hockey team at the University of New England where she was named UNE Female Athlete of the Year in 2005. She earned her Master’s in Sports and Exercise Studies from Smith College.