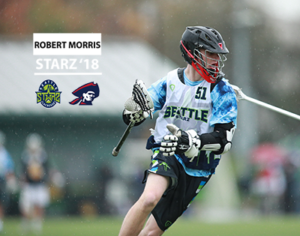 Congrats to Seattle Starz 2018 Attackman Conner Whyte on his commitment to play NCAA D1 lacrosse at Robert Morris University. Conner has been playing for Seattle Starz for many years while continuously developing and advancing his game, and has become a big-time player on the 2018 squad. His skill set and lacrosse IQ have also greatly benefited from his participation in box lacrosse, both for the Seattle Starz program as well as playing in Canada. This hybrid style play makes RMU an ideal fit for Conner as the colonials continuously boast a high tempo offense that features the best of both worlds, and is consistently ranked near the top of the country in offensive production. When asked about his commitment to RMU, Conner had this to say, “ I’m very excited to announce that I will be attending Robert Morris University. I’d like to thank the Seattle Starz family for everything. They pushed me to be the best that I could be, and made the whole recruiting process so fun; they were there every step of the way for me. I’d also like to thank Coach Ratcliff for helping me with the process and being an amazing coach and friend.”

Conner will be joining the Colonials in the fall of 2018, and will be a great addition to a team that plays fast, unselfish, and loves to play together. Seattle Starz High School Director Lewis Ratcliff has been instrumental in seeing Conner realize his potential, “I’ve had the pleasure to coach Conner both on the field and in the box for the past several years. Due to the speed at which he plays, he has consistently been a top goal scorer in our program, whether it be in the box or on the field. His passion for the game is very clear to anyone who has seen him play. I’m excited to see Conner give his commitment to an NCAA D1 program like Robert Morris, and look forward to seeing him push himself at the next level.”