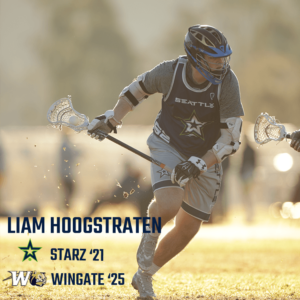 Congratulations to Starz ’21 attacker, Liam Hoogstraten, on his commitment to NCAA D2 Wingate University. The four year Effort & Honour Roll student at Robert Bateman Secondary School (Abbotsford, BC) captained both minor field and box lacrosse teams for his community teams in Abbotsford where he led in goal scoring. Hoogstraten was also a Canadian BC Provincial Field Lacrosse Team member and a Burnaby Junior A Men’s Box Lacrosse 2020 Draft Pick.

“Given that Seattle Starz is the most competitive program in the Pacific Northwest, I was honoured to be selected to represent the club as a Canadian player in order to elevate my game,” stated Liam.  “Special thanks to my parents for their commitment to help make this happen and for always cheering me on. Stand-out coaching provided by Jack Pruitt, Matt O’Neill, Dylan Hummel, and Kinori Rosnow got me to the next level and allowed me to recognize my dream of playing collegiate lacrosse. I would also like to acknowledge the support from team management (thanks Alli!) over the years and the friendships I gained. Credit is also due to numerous coaches and supporters in Canada, most notably Tyler Pace, Ian Radonich, and Brad Connolly. I am excited to begin my next chapter as a Wingate Bulldog!”

“Congratulations to Liam on his commitment to Wingate! Liam is an inquisitive and physical attackman who will do whatever is asked of him to support the team,” said Pruitt. “Practices with Liam always included thoughtful, specific questions about what he needed to do better and how he could support his teammates. This, in turn, resulted in better dodging ability, smoother integration into the offense, and an absolute missile of an outside shot. His size and physicality might lead you to think you’d be dealing with a brute under the helmet – quite the opposite. He is whip smart and you absolutely cannot get him to stop smiling. Liam’s energy is contagious everywhere we go. There is not a player in our program that doesn’t like Liam (or, as he is affectionately known, “Big Rig!!!”) – he is a world class teammate. Congrats again to Liam and GO BULLDOGS!”