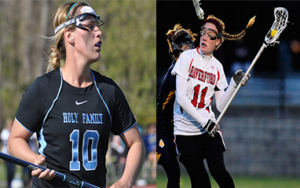 Stephanie ‘Stevie’ McNesby, a two sport NCAA D2 athlete, was a four year starter for the Holy Family women’s lacrosse program. Her senior year she was named to the IWLCA North-South Senior All-Star game and became the program’s all-time leading scorer in points, assists, draw controls and caused turnovers and second over-all in goals. McNesby was the conference Player of the Year in 2012 and Rookie of the Year in 2010. Following her playing career, Stevie coached for the Stockport Lacrosse Club in England as the Local Development Officer. Upon returning to the US she has coached for her alma mater, Ultimate Lacrosse, a top level girls club lacrosse club on the east coast, and at the Agnes Irwin School in PA.

Diana Perry, a four year starting midfielder at NCAA D3 Haverford College, was also an offensive powerhouse in her senior year. She led her team in goals, points, shots, shots on goal and draw controls. Perry was named to the IWLCA All-Metro Region First Team in twice (2015,2014) and the Second team once (2013). The former Ford was also a three time Centennial All-Conference first team selection. She is currently a coach for Seattle Prep.