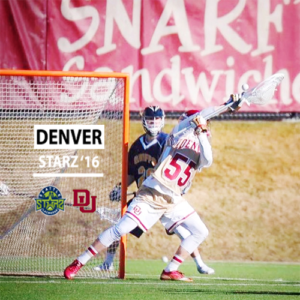 Varsity Captain and starting goalie at the Eastside Catholic school in Sammamish, Wa.
2016 Defensive Player of the Year
Adrenaline All-American

Freshman goalie at NCAA D1 national power house, the Univ. of Denver. Denver is off to another undefeated start so far in 2017, and has eyes set on another Nat’l Championship.

Seattle Starz: Denver is ranked at the top of the polls, what can we expect to see out of this year’s team?

Josh Matte: DU is consistently ranked either #1 or #2 in most collegiate lacrosse polls. At DU we really see this as a challenge because other top teams see us as the team to beat. So far, as a team, we still don’t think we are playing our best lacrosse. Our roster’s potential is crazy and we are working every day to make sure we peak during the right part of the season (NCAA Tournament).

SS: What has been the biggest challenge from high school lacrosse to NCAA D1?

JM: First off, the transition from high school to college is crazy. I don’t think there is anything out there that can totally prepare high school players for what is ahead; there is always a learning curve and room to improve. For example, I learned that being the best player on your high school team, or in the state for that matter, doesn’t mean anything when it comes to D1 lacrosse. On D1 teams, every player was the best player on their team and probably in their state. All of that aside I think the biggest transition from high school is the speed of the game. From my perspective, this means the overall shot selection and shot speed were improved. This all just takes getting used to. I am still in the middle of that process, and my end goal is to try to become as consistent as possible with the new challenges that college lacrosse has brought.

SS: Coach Tierney and Coach Brown are both widely regarded as two of the best in the game, what has it been like to get to learn from those guys?

JM: Coach Tierney, Coach Brown, and Coach Orsen are hands down the best coaches in the game. It has been incredible to learn from them. What makes these coaches so incredible is that if you buy into their systems, they will do whatever they have to do to make sure you completely learn it and feel comfortable applying it. Seeing what these guys do for us is inspirational, and it makes players want to play as hard as we can for them and each other.

SS: You committed to Denver as a sophomore, what was it about the Pioneers program and Denver as a school that led you to land there?

JM: The first thing that really attracted me was the school it was just somewhere I felt that I belong. From a lacrosse perspective, I loved the coaches and really liked the type of kids that they were recruiting. I visited around 8 or 9 other schools that I was pretty serious about but decided on DU because to me it easily surpassed the others.

SS: How did being a part of the Seattle Starz program prepare you for success at the NCAA D1 level?

JM: Without Seattle Starz and West Coast Starz, there would have been no chance of me getting high caliber offers; because I just wouldn’t have been able to be noticed by college coaches. Also in my opinion, Seattle Starz is the only way to play at the highest level while living in Washington.

SS: What was your favorite part about the Seattle Starz program?

JM: There are so many people that influenced me throughout my lacrosse career. Besides my family, the most impactful people were Mike Pittas, Lewis Ratcliff, Chuck Goodman, Scott Kelly, Bob Holland, and all of my teammates.

JM: Practice and workout more then you and your coaches think you need to. The only way to be the best is to beat out the competition. When it comes to recruiting, there is a ton of competition.

SS: Thanks for the time Josh, best of luck this year!