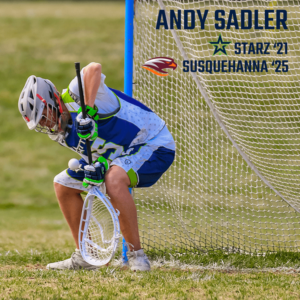 Congratulations to Starz ’21 goalie, Andy Sadler, on committing to NCAA D3 Susquehanna University in PA. Sadler, an academic high honor roll student, is a starting member of the SAAS varsity squad and an all-conference pick. Andy was also named a MadLax All-Star.

“I would like to thank Seattle Starz and my family for the opportunity to compete across the country,” stated Sadler.  “Starz provided me with the opportunity to grow my abilities as a goalie and my experience as a player and a young adult. Thank you Coach Pruitt and Coach Kelly for believing in me and giving me a chance to grow and guiding me through the recruiting journey.”

“Congratulations to Andy on his commitment to be a Susquehanna River Hawk! Andy’s story is incredible and inspiring – after several seasons improving his goaltending abilities with our United team, Andy cracked the roster for our 2021 Elite team,” said Pruitt. “Not satisfied with this step alone, he continued to hone his skills as a goalie both during and outside of practice time. Most notably, he developed into a vocal leader of our clear and has become very poised with the ball in his stick following a save. Andy was meticulous and thoughtful throughout his entire recruiting journey, paying attention to the details while never losing sight of the big picture. He is a mature young man who took the highest degree of ownership over his process, and this commitment is his hard-earned and well-deserved reward for that personal investment. We cannot wait to see Andy continue his relationship with lacrosse under the guidance of Coach Moan at SU. Congratulations again Andy and GO RIVER HAWKS!”