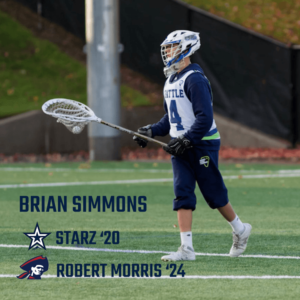 Congratulations to Starz ’20 Goalie, Brian Simmons, on committing to NCAA D1 Robert Morris. The Colonials are coming off of an historical 2018 season. The team won their first NEC championship and, with the conference AQ, also garnered the program’s inaugural NCAA tournament appearance and win.

“I am extremely excited to announce that I have committed to play division one lacrosse at Robert Morris University. I would like to thank coaches Rich, Lewis, Matt, Keith, and Steve for guiding me to be the person and player I am today, ” said Simmons. “I would also like to thank my family; without their sacrifice and support this would not have been possible. The Starz program not only gave me the opportunity to play in front of numerous NCAA coaches, it also motivated me to become the best player I can be.”

“Brian is one of the hardest working, committed and talented goalies I have ever coached and clearly the Robert Morris coaching staff saw the same,” remarked Rich Schwartz.  “Brian has worked tirelessly over the past three years to improve his craft; all the while commuting from Canada, an example of his impressive commitment to his teammates. Coach McMinn got a lightning fast, smart, work horse of a goalie who will make an impact on day one.  Congrats Brian!”